High-resolution 3-D seismic data from offshore Angola is used to document spatial variations in  the  planform  geometry  of  polygonal  faults  (PFs)  hosted  in  a  succession  of  Neogene-Quaternary hemipelagite deposits. We show that the regionally isotropic PF network becomes anisotropic around pockmarks, salt stocks and salt withdrawal basins. Four main patterns are
observed:  ladder  patterns  composed  of  long  (first-order)  and  short  (second-order)  faults which  are  orthogonal  to  each  other,  radial  patterns  around  salt  stocks,  concentric  patterns around pockmarks and in salt withdrawal basins, and a hybrid form of radial and concentric fault  patterns  where  pockmarks  occur  on  diapir  flanks.  Fluid  venting  structures  such methane-related carbonates and chimneys stem from PF intersections. The linear-to-elliptical planform geometry of fluid venting structures is controlled by the local state of stress around PFs. The transition between radial faults and background PF occurs at 0.5-1 stock radius from the  salt  contact  and  is  interpreted  as  a  marker  of  the  diapirs  hoop  stress  field.  Our  work highlights  the  sensitivity  of  polygonal  fault  systems  to  perturbations  in  the  regional  stress state, which further controls the location and geometry of fluid venting structures.


Joint and fracture networks provide pathways for fluid flow and predicting spatial variations in their length, spacing and orientations is vital in reservoir modelling (Rawnsley and Wei, 2001). In the absence of cores from densely spaced wellbores, reservoir geologists rely on constraints of the in-situ or palaeo stress field and analogous outcrop exposures to extrapolate fracture models to the 10-1000’s m scale (Bourne et al. 2000; Rawnsley and Wei, 2001). To overcome the limitations imposed by the scale of outcrop exposures and discontinuity of data samples between adjacent wells we present a case study of laterally extensive (>100 km2) arrays of small intra-formational normal faults in a Neogene-Quaternary succession of hemipelagites offshore Angola. These small, densely-spaced normal faults formally known as Polygonal Faults (PFs) cut seismic horizons with throws of 10-15 m and define vast polygonal fault networks (Fig 1). The spacing and length of the faults are crudely related to tier thickness and because they are confined to very fine-grained sediments they are potentially, scalable analogues to sub-seismic fracture networks in units containing shale gas.

Polygonal fault systems (PFS) are a unique type of normal fault in that they form in subsiding sedimentary basins free of lateral tectonic forces (Goulty, 2001). They form by contraction-driven shear failure during the early stages of sediment compaction and dewatering (Cartwright, 2011). During one-dimensional consolidation of the sediment layer, the maximum compressive stress (Sv) is vertical and the intermediate (SH) and least compressive stresses (Sh) are horizontal (Terzaghi and Peck, 1948). The lack of strongly preferred fault strikes in PFS implies that the horizontal stress is effectively isotropic over large areas of basins where polygonal faults form (Cartwright, 2011; Goulty, 2001). In this study we show that polygonal faults are strongly aligned around pockmark craters, salt withdrawal basins and around salt stocks and walls (Figs 2-3). Since SH is parallel to fault strike it can be deduced that regions where the faults are aligned the regional stress state was anisotropic. The aim of this work is to use high-resolution 3-D seismic data to investigate relationships between the planform geometry of PFs and their proximity to salt structures and fluid venting structures. We also demonstrate that the planform arrangements of PFSs control the location and geometry of fluid venting structures such as seismic chimneys and methane-related carbonate patches.


Two layer-bound arrays (tiers) of PFs are identified in the Neogene-to-Quaternary section of the study area (Fig 1). The deepest tier (Tier 1) ranges from 70-130 m thick and is composed of Late Miocene fine-grained turbidites. The shallowest tier (Tier 2) contains Pliocene claystones and has a maximum thickness of c. 250 m but thins laterally until the tier pinches out (Fig 1). Where the seismic facies is parallel stratified and dips gently, the normal faults cut intra-tier horizons so as to define vast (isotropic) polygonal fault networks (Fig 2a). The strike length and spacing between individual PF segments in map view are crudely related to tier thickness. For example, PF segments in Tier 1 range from 100-180 m in length and have an average spacing of 150-200 m, whilst those in Tier 2 are 150-250 m in length and have an average spacing of 100-150 m.

Fig 1 - Arbitrary seismic line intersecting NE and E flank of Salt Stock 1and showing the variable thickness of PF tiers. See position of line on Fig 3d. The transition from radials (RFs) to PFs is denoted by the transition boundary. The pinch-out of Tier 1 is indicated by the dashed line. 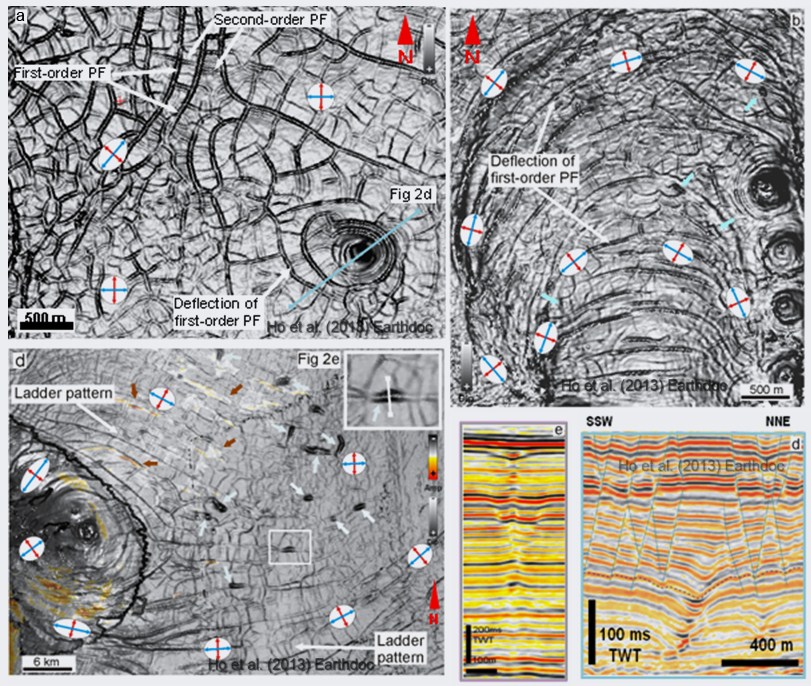 
PFs switch to locally developed concentric faults (CFs) around and above pockmark craters located near the base of tiers (Fig 2a-b, d). The diameter of the concentrically faulted regions is ca. 600-1200 m and closely matches the diameter of pockmarks although the CFs sometimes occur outside of the immediate pockmark crater (Fig 2d). The strikes of first-order PFs deflect around pockmarks or spiral toward the centre of the pockmark crater (Fig 2a). First-order PFs are also concentrically aligned in salt withdrawal basins (Fig 2b). Since they are aligned parallel to the contours of the folded substrate and the strikes of ‘through-going’ tectonic faults we suggest their alignment reflects extensional stresses imposed on tiers during deepening of the salt withdrawal basins.


Small chimneys 150 m in diameter occur between PF’s in some localised areas. They are often elongate and parallel to the strikes of the nearest PFs (Fig 2c). The chimneys occur directly above the intersection of conjugate PF pairs in the crest of hangingwall monoclines (Fig 2e). We postulate that the fluid migrated along fractures which opened preferentially in these locations and perpendicular to the perturbed stress field around adjacent PFs. Fluid flow also facilitated production of methane-related carbonates (see Ho et al. 2012) which are expressed as positive high-amplitude anomalies (PHAAs) on (Fig 2c). PHAAs have linear planforms which are also parallel to PF strikes. The close spatial and geometric relationship of venting structures to PFs strongly suggests that PFs provided venting-exits and that the local stress state controlled their elongate geometry.

PFs switch to a closely-spaced array of radial faults (RFs) around salt stocks (Fig 3a-g). RFs have the same spacing (100-230 m) as PFs and are confined to the same tiers. The one exception occurs where Tier 2 pinches out ca. 6-7 km before the salt contact on the East-and-Western flank of Salt Stock 1 (Fig 1, 3d). Note that RFs occur at the same location in the underlying tier (Fig 3a).

The regional isotropic (polygonal) faults pattern is separated from locally developed RFs by an intermediate zone of RFs and CFs in Figure 3f. The lateral tips of CFs terminate at longer RFs like in the ladder patterns shown in Figures 2a-c. Deflections of first-order PFs provide an indication of stress trajectories at the time of faulting and constrain the lateral extent of the local hoop stress field associated with the salt stocks. This outermost transition boundary is located approximately 1 stock radius from the salt contact (Fig 3f) whilst the boundary marking the switch to just RFs is only 0.5 stock radius from the salt contact (Fig 3a,d,e). Both transition boundaries mimic the plan form geometry of the salt stocks. The change from radial-to-concentric and concentric-to-PFs is interpreted to represent decaying magnitudes of hoop stress with distance from the salt stock.


The spoke-like RF patterns are disrupted around locally developed pockmarks (Fig 3d, g, e). The RFs deflect from their initial, normal trajectory by 15-40° around the perimeter of pockmark craters (Fig 3g) forming a hybrid radial-concentric fault. The angle of deflection depends on the diameter of the pockmark with respect to fault spacing and the proximity of the pockmark to the salt contact. The patterns indicate that hoop stresses can vary as much as 40° from the tangent to the salt contact at the base of the flank but is no more than 15° within the first 200 m of the salt contact. The deflection of RFs toward adjacent salt withdrawal basins (Fig 2b-c) reflect the superimposition of stress states associated with the diapir and extensional withdrawal basin onto the regional isotropic stress field.

We thank Total and Cardiff University for the funding, Total for giving the permission of publication.