MDAC tubes have various morphologies, as demonstrated by a classification of Blouet et al. (2012) that tubes are organized principally in three different ways: individual tube, tube-clustered nodules and beds.

The classification below is extracted and adapted from Blouet et al. (2012) (Fig. 1A-F): 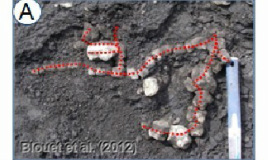 Fig. A. Small tube showing complex branching.
1) Tubes (Fig. A, F): Tubes occur in two populations distinguished on the basis of their diameter:

The large tubes (Fig. F) have an external diameter ranging from 40 to 60 cm. Their overall predominant orientation is subvertical, but they can show folding. They occur at preferential stratigraphic levels, where they are relatively scattered.

Small tubes (Fig. A) range in external diameter from 2 to 15 cm, and can occur either isolated like their larger counterparts, or in various types of associations: vertically elongated clusters of tubes in a marly matrix, or in lenses with a high carbonate matrix content. Excavating behind the outcrop surface shows that small tubes are most of the time connected in a complex 3-D lattice, with no preferential orientation. 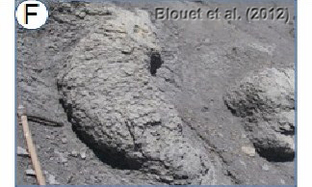 Fig. F. Large tube.
All tubes have a well-expressed central conduit, with a diameter ranging from 1 to 3 centimeters. The conduit infill is highly variable from one tube to another and reveals a very complex story of successive cementations and dissolutions.
Slabs made of broken tubes lying in horizontal position and encrusted by oyster-like bivalves are one the contrary filled with only a few early cements and mud similar to the surrounding marls.
2) Nodules (tube clusters) (Fig. C, D): Irregular nodules (Fig. C, D) occur in layers defining in some cases roughly hemispheric domes (Fig. C) ca. 1 m in diameter with sharp boundaries
3) Beds (Fig. B, E): The last type of carbonates in the Marnes Bleues Fm. consists of irregular limestone beds with occasional protruding roots (downwards) and “horns” (upward).” -  Blouet et al. (2012)