An innovative and low-cost method for assessing fault seal integrity by using the geometry of intersection between faults and gas conduits (so called chimneys, or pipes) has been presented by Ho (2013), with examples in 3D seismic data from offshore Angola. During the investigation of a new type of gas chimney with uncommon linear planform (in contrast with the more common sub-circular chimneys), it has been observed that these chimneys intersect downward or terminate at different parts of faults. Statistics show that 73% of these chimneys originated from the lower foot wall or fault surface below the mid-level (Figure 1a). This suggests that, in most cases, overpressured gas did not migrate all the way up the fault, but rather created preferentially vertical hydraulic fractures along the entire fault strike, or used pre-existing fractures to leak upward; hence the fault surfaces (at least the upper half) did not behave as efficient migration pathways and were impermeable during gas expulsion. As a result, hydraulic fractures formed in a "wall"-fashion (Figure 1b) which are termed "Linear Chimneys".
The top of Linear Chimneys is commonly characterized by alignments of seep carbonates within depressions on the palaeo seafloor, seismically expressed as linear positive high amplitude anomalies. All of them are parallel with adjacent faults, irrespective of their tectonic or diagenetic origin (i.e. polygonal faults). The faults are preferentially orientated and are parallel to salt-related structures. The relationship between anisotropy and local structure points at the role of regional and local stress in controlling fault initiations and propagations. Chimneys only develop in linear planform in areas with anisotropic (polygonal) fault arrangements. In areas where the (polygonal) fault network is isotropic, the chimneys and overlying carbonates exhibit circular planform. Anisotropic stress conditions surrounding anisotropic faults coupled with (partial) fault impermeability determine directions of gas migration pathways and the linear morphology of chimneys.
Our recent studies (Ho et al., 2016, 2018) have established an innovative method to investigate fault seal integrity by using spatial relationship between faults and chimneys; and have identified the formational process for a new type of chimney, and also highlighted the impact of fault-related, anisotropic stresses on the propagation of gas fractures.
A. Offshore Angola - Study Area 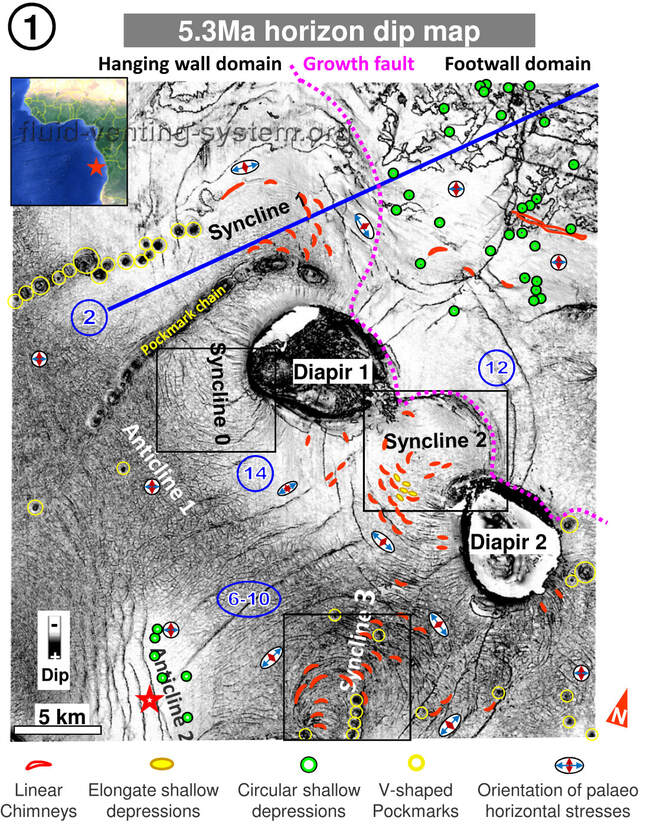 (2) The study area is located in the transitional domain of the salt thrust.
B. Morpho-geometry & characteristics of Linear (planar) Chimneys in fault networks
Linear (planar) Chimneys have a lateral aspect ratio > 4:1. They often associate with the linear depression & linear seep carbonate at the top, or the linear gas column at the base. They occur in the Pliocene aged polygonal fault (PF) tier. 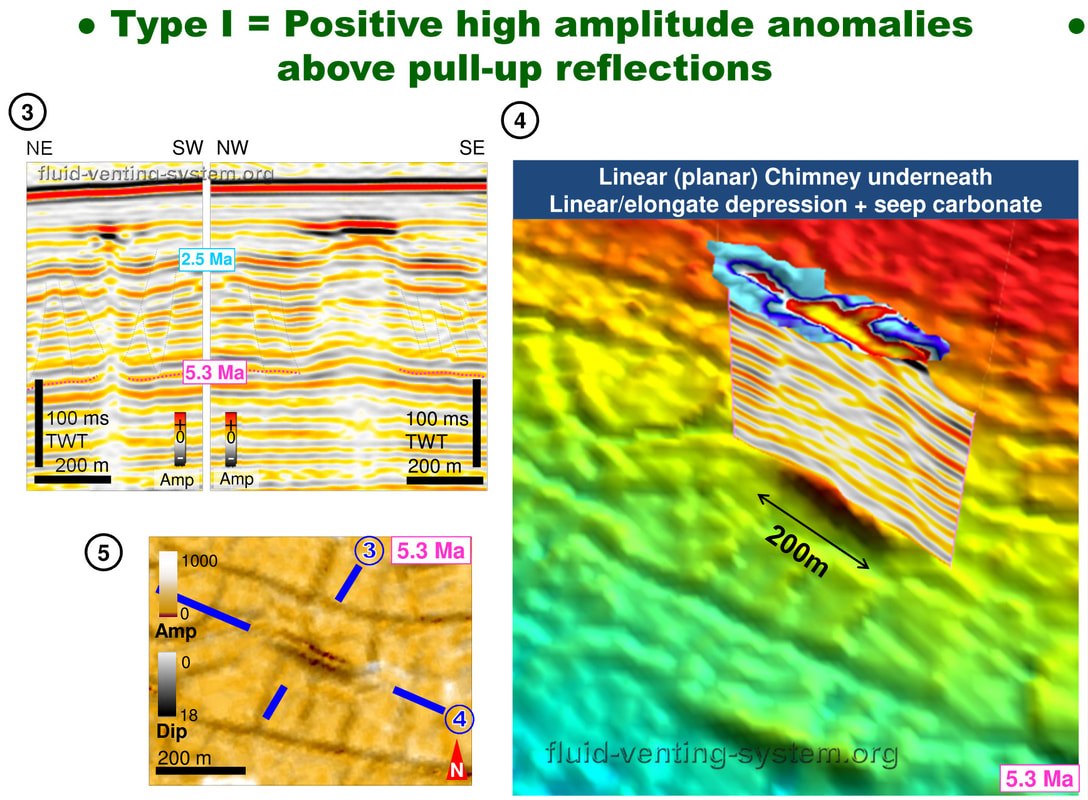 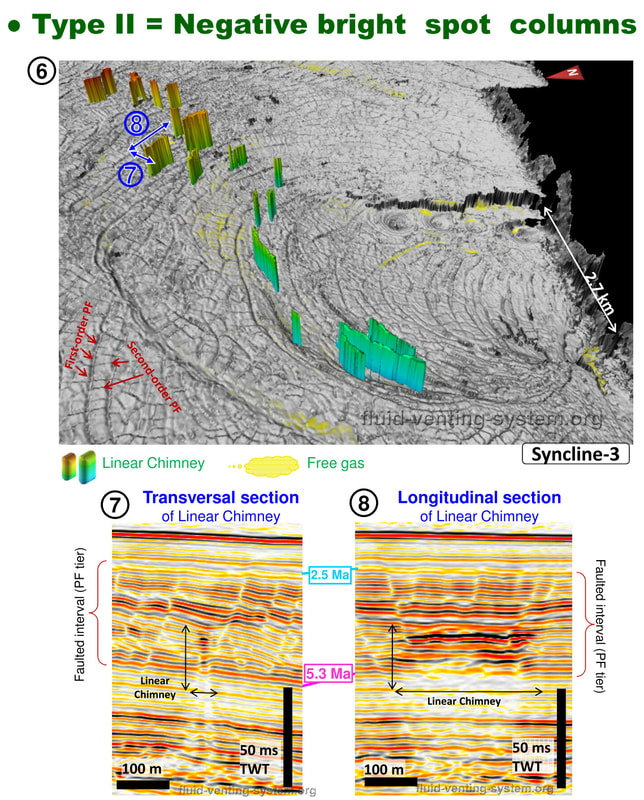 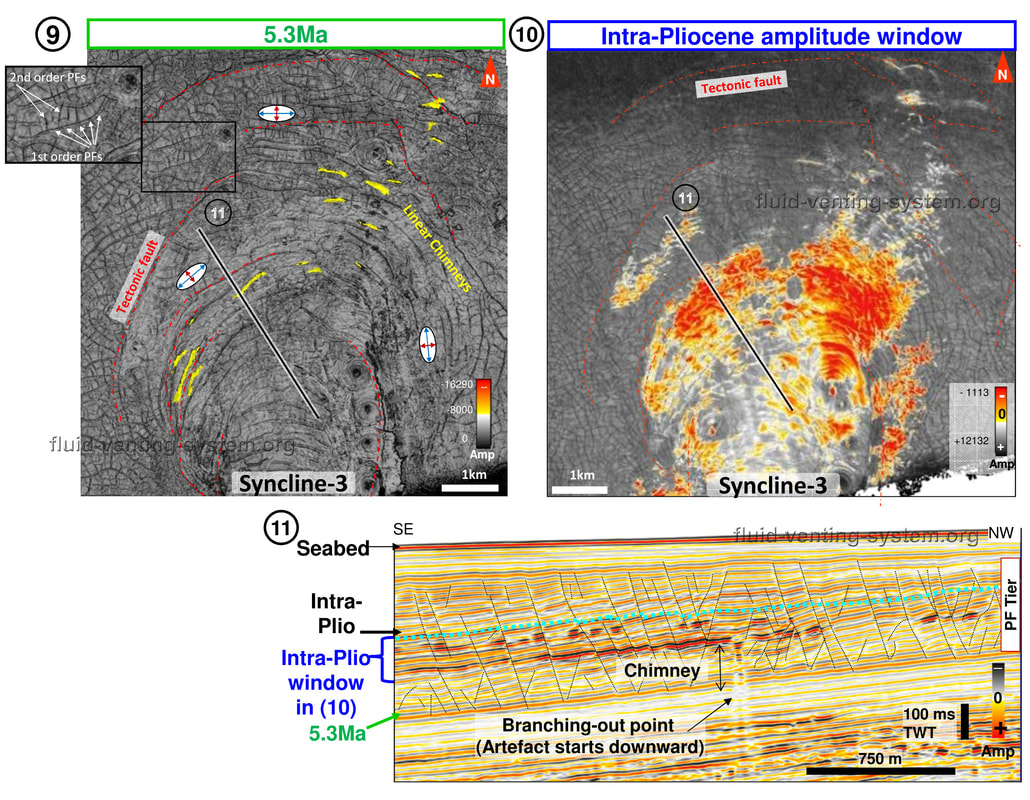 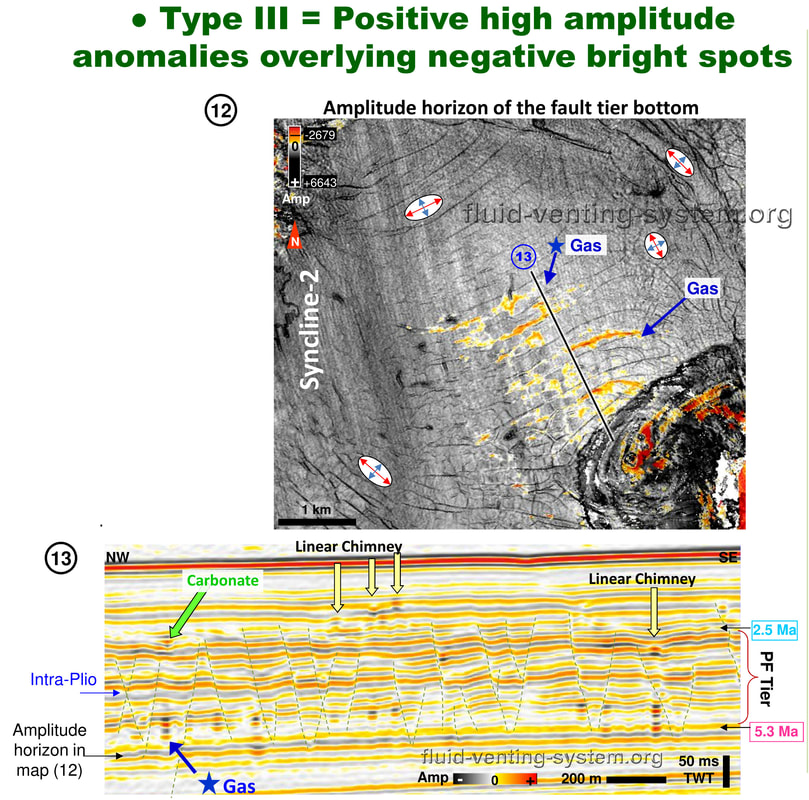 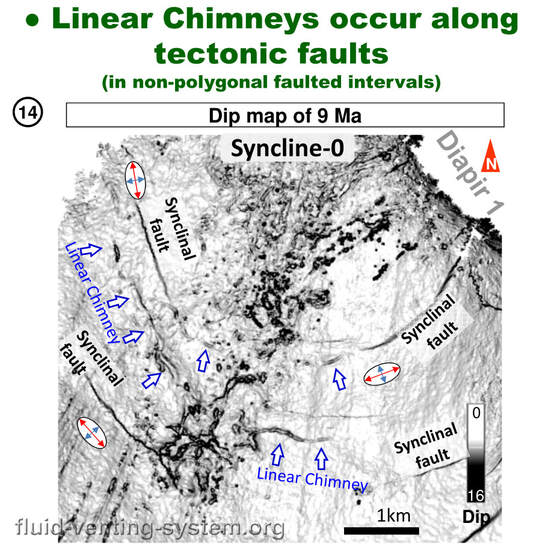 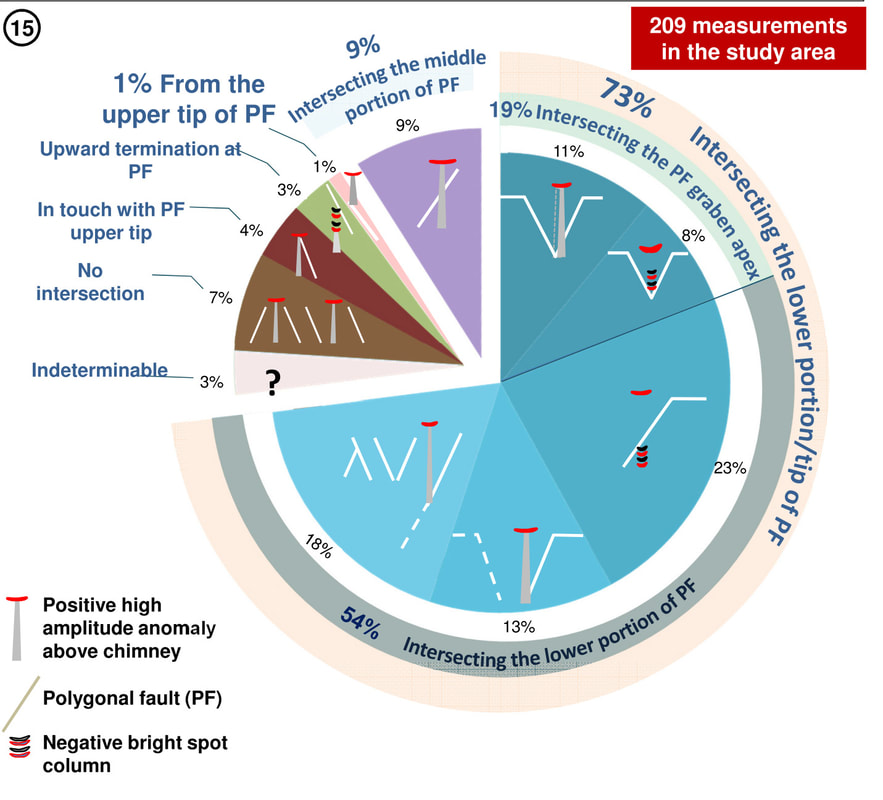 (15) Nucleating positions of chimneys in fault blocks provide insight on fluid transportation efficiencies along faults. If chimneys intersect the lower portions of faults or root in strata below the faults, it likely indicates that fluid (gas) migrated vertically, and cut across  fault planes.  If faults provide viable migration pathways, then fluid expulsion and chimney nucleation would occur at the upper tip of the fault (Ho et al., 2016).
D. Interpretation
Permeable fault (interpreted) -
Chimney roots at the topmost tip of fault (1%) 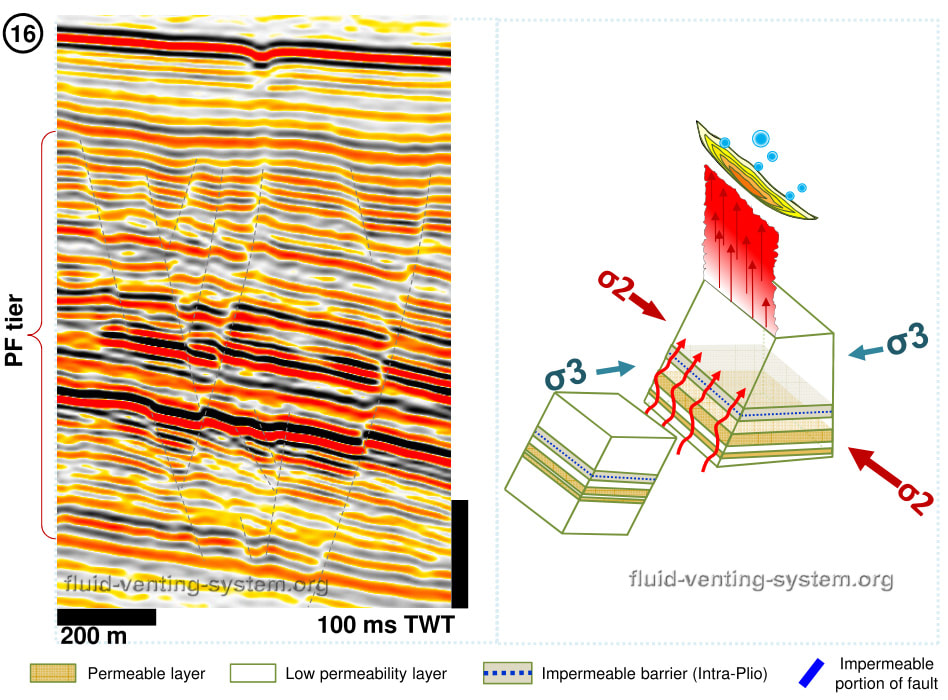 (16) Gas migrated along the fault and was expelled from the upper fault tip, where chimney nucleated.
Impermeable  faults  (or partially) -
Chimneys stemming from the bottom/lower part of fault blocks (73%) 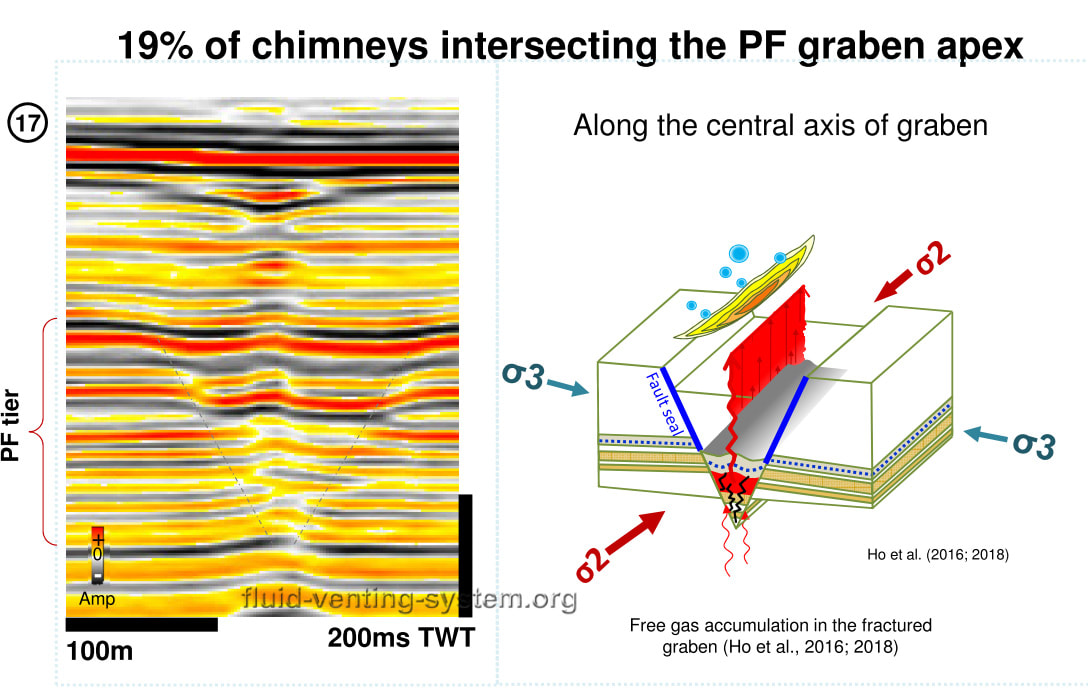 (17) Gas is compartmentalised by impermeable faults and a horizontal barrier in the graben. Gas escaped by creating a chimney.Free gas accumulation in the fractured graben (Ho et al., 2016; 2018).
54% intersecting the lower PF footwall or the base below 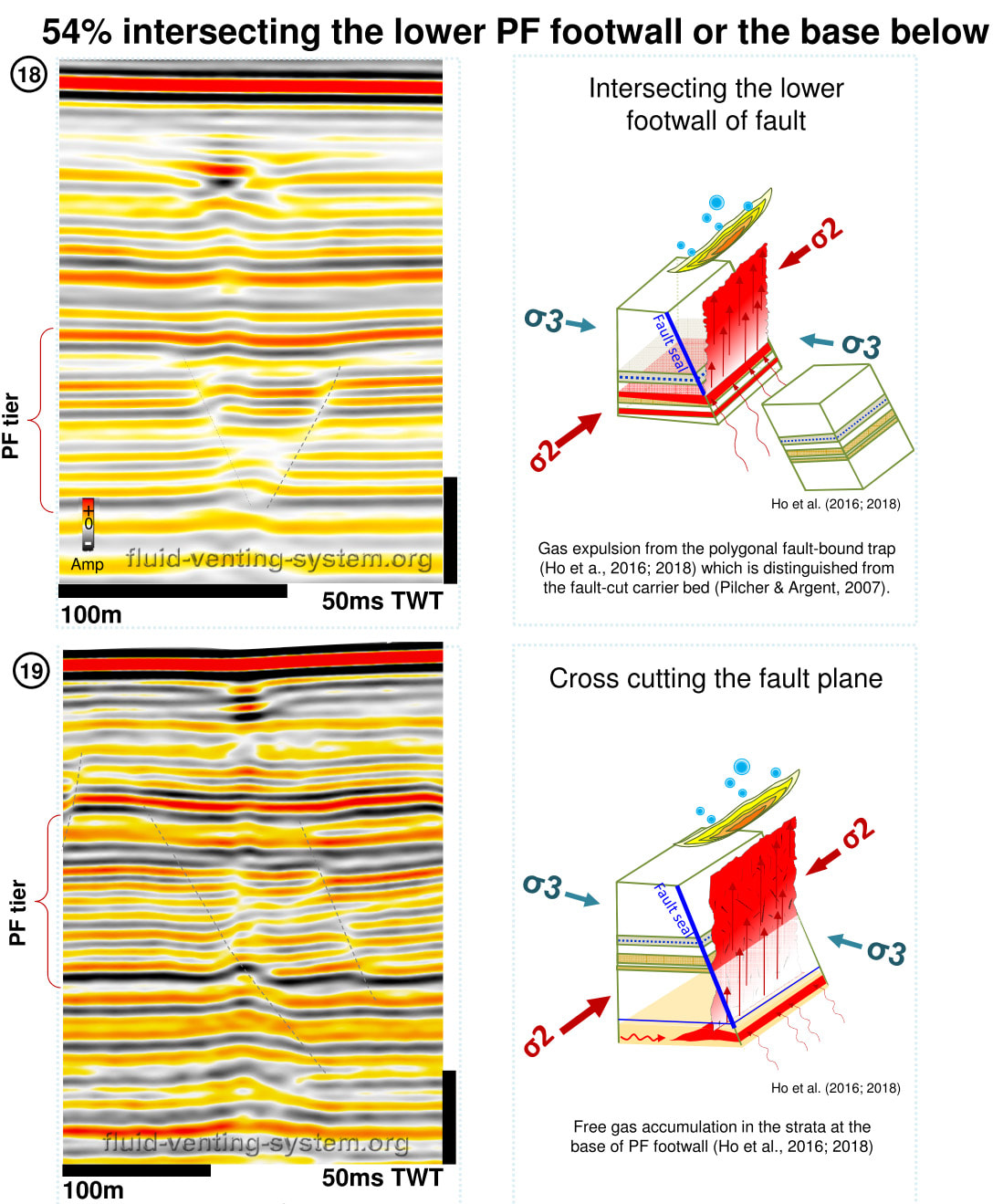