Joint and fracture networks provide pathways for fluid flow and predicting spatial variations in their length, spacing and orientations is vital in reservoir modeling (Rawnsley and Wei, 2001). In the absence of cores from densely spaced wellbores, reservoir geologists rely on constraints of the in-situ or palaeo-stress field and analogous outcrop exposures to extrapolate fracture models to the 10-1000's m scale (Bourne et al. 2000; Rawnsley and Wei, 2001). To overcome the limitations imposed by the scale of outcrop exposures and discontinuity of data samples between adjacent wells we present a case study of laterally extensive (>100 km2) arrays of small intra-formational normal faults in a Neogene-Quaternary succession of hemipelagites offshore Angola. These small, densely-spaced normal faults formally known as Polygonal Faults (PFs) cut seismic horizons with throws of 10-15 m and define vast polygonal fault networks (Fig 1). The spacing and length of the faults are crudely related to tier thickness and because they are confined to very fine-grained sediments they are potentially, scalable analogues to sub-seismic fracture networks in units containing shale gas.

In this study we;
1) demonstrate the spatial complexity of the plan form geometry of polygonal fault systems (PFS) and classify patterns into 5 types namely; Isotropic-polygonal, ladder patterns, concentric patterns, radial patterns, and complex combinations of the above.
2) demonstrate how changes in fault patterns can be used to reconstruct relative orientations of the horizontal stresses at the time of faulting and infer relative magnitudes of stress anisotropy associated with salt structures, withdrawal basins and gently dipping stratigraphy.
3) demonstrate the spatial and geometric relationship between fluid venting structures and polygonal fault systems.

Our work highlights the importance of;
The influence of stress anisotropy on the geometry of small, intra-formational fault systems in shales and claystones
The role of extensional faulting and the near fault stress field on the fluid migration. 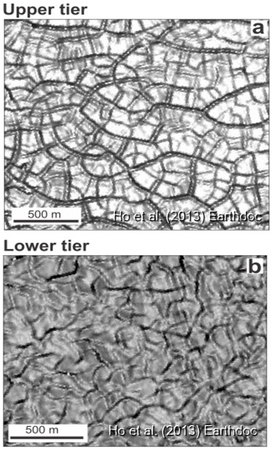 
The study area is located in the Neogene-to Quaternary stratigraphy of the salt-bearing passive margin of Western Africa in the Lower Congo Basin.

Two layer-bound arrays (tiers) of PFs are identified in the Neogene-to-Quaternary section of the study area (Fig.1.1a-c).


The intervals deformed by polygonal faults are deformed by salt structures and associated crestal and keystone faults due to gravity gliding of the overburden over detachment surface composed of Aptian evaporites.
Tier stratigraphy is intersected or disrupted by fluid venting structures such as chimneys, pipes and pockmarks.
Tier stratigraphy thickens into salt withdrawal basins and pockmark craters and thins onto the flanks of salt diapirs.

Fig 1.1.(a-b) (Upper right) - Dip map showing isotropic arrangement of polygonal faults in each tier. c) (Above) Arbitrary seismic line intersecting NE and E flank of Salt Stock 1 and showing the variable thickness of PF tiers. See position of line on Fig 3d. The transition from radials (RFs) to PFs is denoted by the transition boundary. The pinch-out of Tier 1 is indicated by the dashed line.
1.2 Genesis and mechanics of PFS

Fig 1.2. The 3D block diagram of the lower to middle portion of a layer-bound polygonal fault system developed in the Tertiary mud rocks of the Central North Sea (UK). Taken from Cartwright and Lonergan (1996).
Interpretation of stress state


During one-dimensional consolidation of the sediment layer; 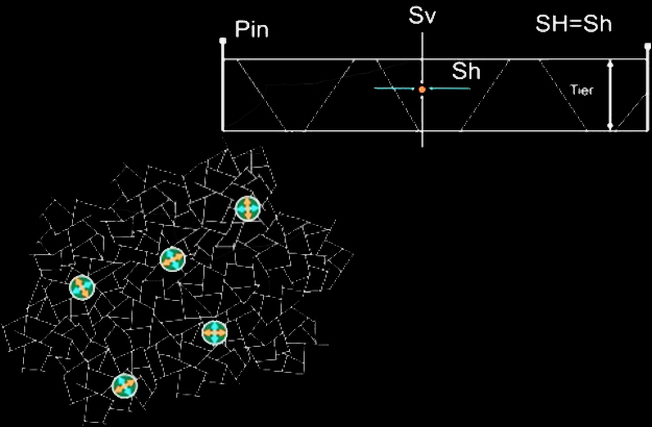 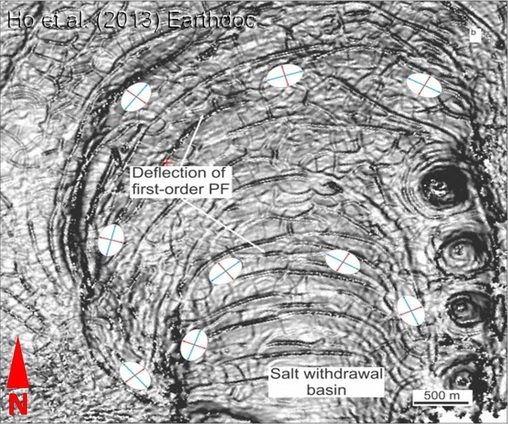 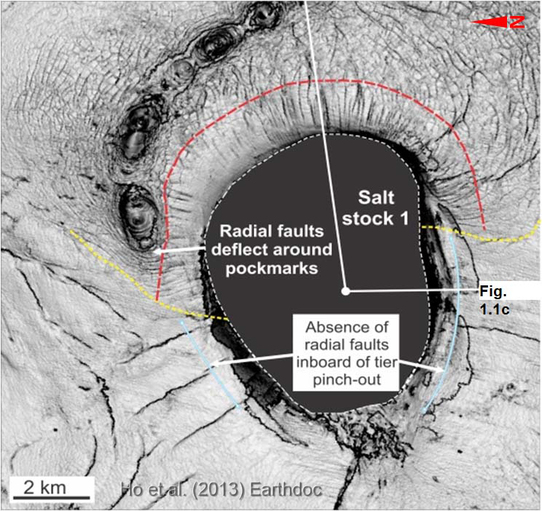 
In accordance with previous studies we find; 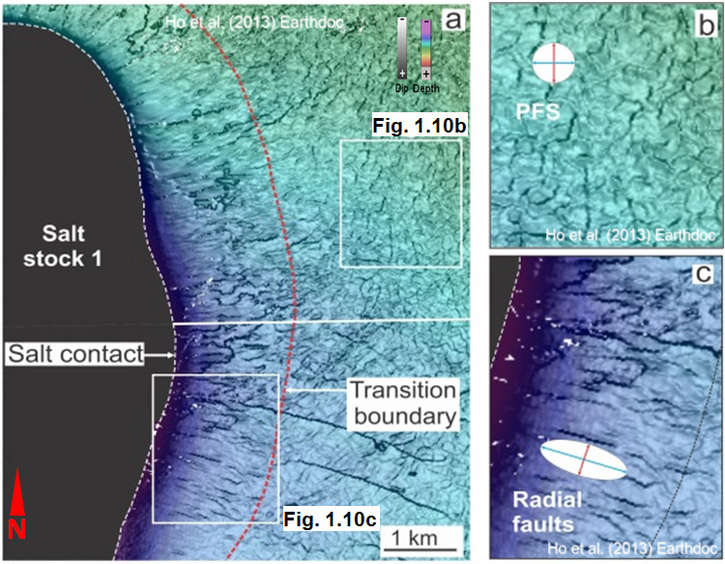 Fig 1.10. (a-c) Zoomed dip maps within Tier 1 showing RFs around Salt Stock 1.
In this study we observe the following differences to previous studies; 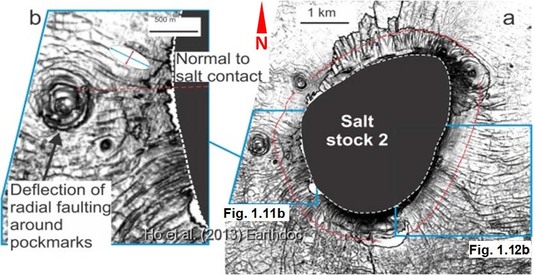 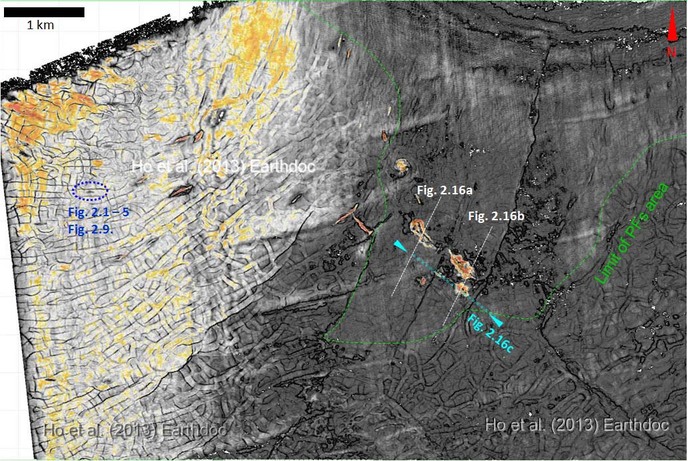 These seismic columns (fig. 2.5 & 2.6 & 2.9) that occur along the central axis of polygonal fault grabens are interpreted as hydraulic fractures (Ho et al., 2012).
Columnar structures are linear in plan view (see linear dim zones on horizons in fig. 2.8 & 2.10).
Columns containing negative bright spots located within PFs grabens (fig. 2.6), it is suggested that free gas accumulates at the lower part of the hydraulic fractures.

PHAAs in this survey are interpreted as methane-derived authigenic carbonate (MDAC) and when located in the gas hydrate stabilization zone are potentially asssociated with gas hydrate (Fig. 2.11).
MDAC formed as a result methane-rich fluids migrating through the hydraulic fractures. 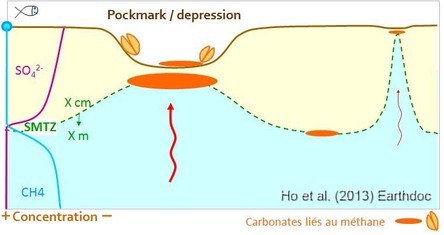 THIS PART HAS BEEN BLANKED OUT FOR COPYRIGHT REASON


Hypothesis for formation of hydraulic fractures:


﻿﻿THIS PART HAS BEEN BLANKED OUT FOR COPYRIGHT REASON ﻿﻿ 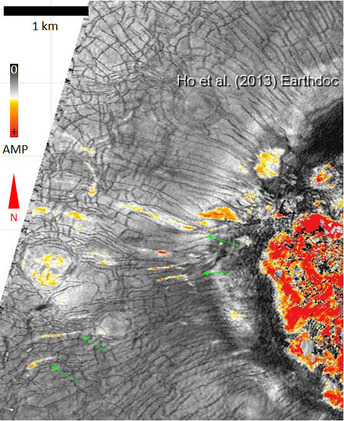 Fig. 2.19. Amplitude of fig. 1.11a.
2.7 Further evidence for the role stress anisotropy and faulting on the geometry of fluid venting structures


﻿﻿﻿﻿THIS SECTION HAS BEEN PARTLY BLANKED OUT FOR COPYRIGHT REASON ﻿﻿﻿﻿